Interview: Why transport lists are an important resource for research on Nazi deportations 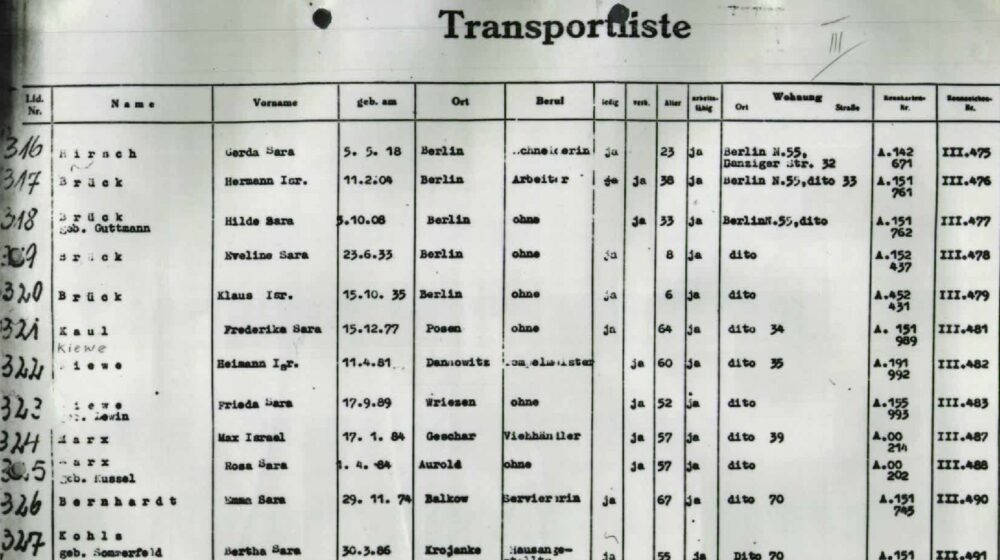 Around 50,000 Jews were deported from Berlin between 1941 and 1945 – but not a single photo of these transports is known to exist. However, copies of the transport lists have been preserved. Akim Jah, a historian at the Arolsen Archives, explains what these lists tell us.

What are transport lists and what were they used for?

The names of the deportees and their last residential address were recorded on transport lists. The Gestapo used the lists to prepare the logistics for the transports. Copies were forwarded to the tax authorities and were also used as the basis for expropriating the deportees. Their assets were confiscated by the state in a pseudo-legal act before being documented in detail and “liquidated.”

The lists show the scope of the deportation and murder of Berlin’s Jewish population. By analyzing the lists, it is also possible to track when and how the residents of individual houses were deported. They also provide information on when certain Jewish welfare institutions, of which there were many, were closed down – a process that sometimes took years.

What don’t the transport lists tell us?

Since the transport lists only list people’s last residential addresses, it is not possible to identify people who had recently moved – Jews who had fled from rural areas to more anonymous cities because of antisemitism, for example, or who had been expelled from regions such as East Frisia on the orders of the Gestapo. Neither do the transport lists provide information about changes of address when persecutees moved within a city. 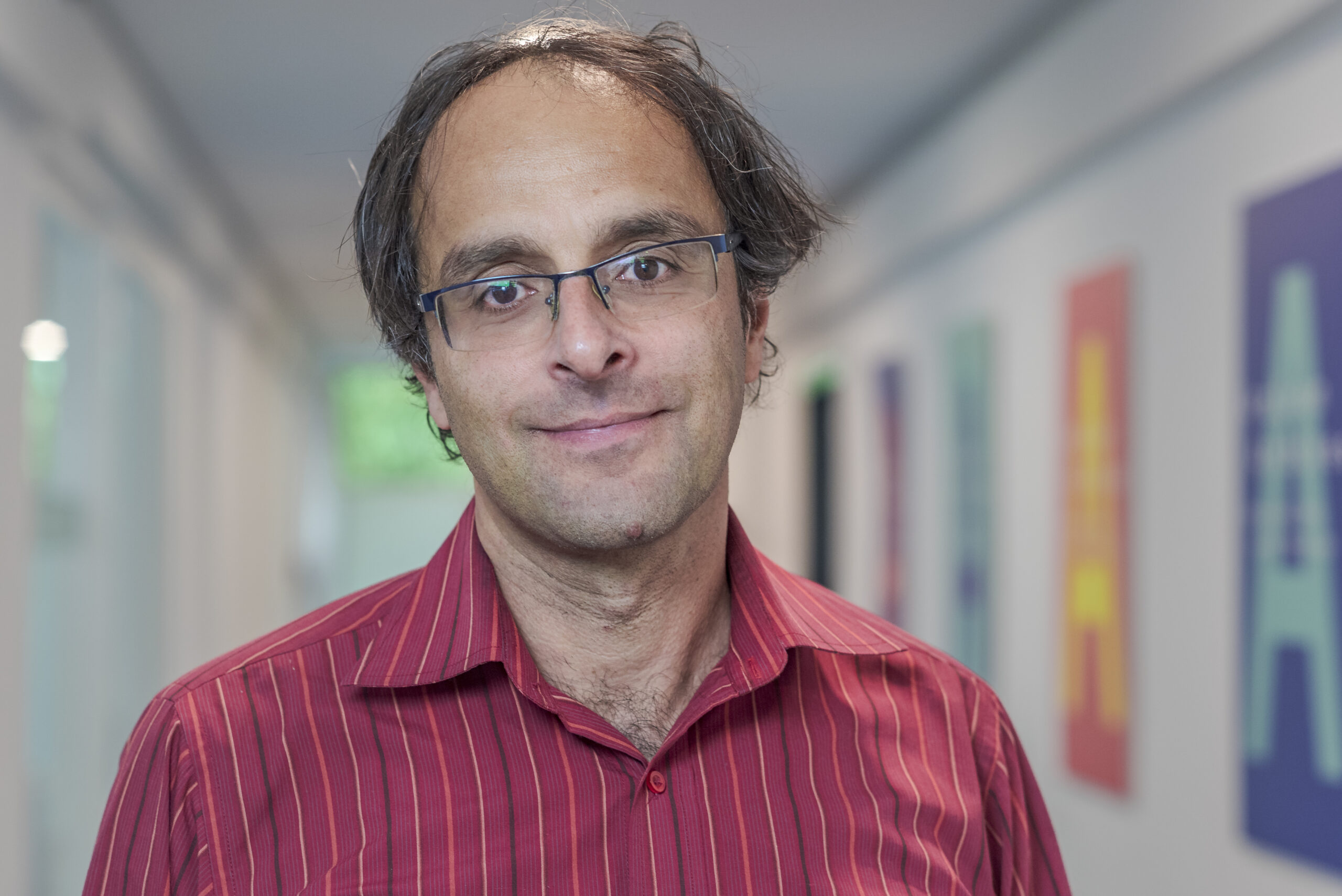 »Transport lists are a vital source of information for reconstructing the transports and for studying the extermination of the Jewish population. Often they constitute the last documentary records of deportees before they were murdered.«

Do the lists enable you to identify different phases in the deportations?

On October 18, 1941, the Gestapo began deporting Jews from Berlin and other large cities and sending them “to the East.” At first, the transports were disguised as an operation to free up housing space. During the first months of the deportations, the primary aim was to remove the Jewish population from the public sphere in Germany. Although people sent on certain transports were killed at their destinations, the killings were not yet systematic.

When did that change?

In December 1941, the Nazi regime decided to murder the entire Jewish population of Europe. At the Wannsee Conference on January 20, 1942, high-ranking Nazi officials approved a program of deportation and murder. From May 1942 onwards, the deportees were killed directly at their destination with few exceptions. Starting in November 1942, all the “transports to the East” from Berlin went to the concentration and extermination camp Auschwitz-Birkenau.

Was there another turning point?

Alois Brunner, who was close to Adolf Eichmann, briefly took command of the deportations from Berlin in the fall of 1942. During Brunner’s time in command, the Gestapo carried out terrible street raids. Jews were no longer just picked up from their homes, they were seized indiscriminately, street by street, and taken to the assembly camp.

What happened during the “Fabrikaktion” (factory action) in 1943?

At the end of February 1943, the Gestapo organized the deportation of Jews who were still working as forced laborers all over the Reich in factories that were important to the war effort. This raid later became known as the “Fabrikaktion.” In Berlin alone, the Gestapo sent more than 6,000 people to improvised assembly camps before deporting them to Auschwitz. The transport lists provide accurate information about their registration in the camps.

The lists usually contain the name and address, date of birth, and age of each person; their occupation, their marital status, and their identification card number are also often included. Most of the time, pre-printed forms were used for the lists, and they almost always consisted of several pages. The transport list for the 20th deportation transport to the East – which left Berlin for Raasiku in German-occupied Estonia on September 26, 1942 – consists of 43 pages and lists 812 people, for example.

Do we know if anyone survived the transport?

One of the few survivors of the Berlin transport was Helga Verleger, née Drexler, who was 17 years old at the time. She and her father Bruno Drexler were picked up from their apartment by the Gestapo on September 24, 1942, and taken by streetcar to the synagogue in Levetzowstraße, which was being used as an assembly camp.

Helga Drexler in the online archive

»They had taken the seating out of the synagogue, and […] many Jewish families who had also been arrested were already camping there […] The train then left at noon on 26.9.42 […] and arrived in Raziku [sic] at dawn, i.e. it suddenly stopped and we could read the word RAZIKU on the sign. I didn’t even know what country I was in […] The doors were opened and we had to get out.«

Helga Verleger, née Drexler, An extract from the testimony she gave on Feb. 19, 1968, at the so-called Bovensiepen trial against former employees of the Berlin Gestapo (B Rep. 058, No. 416, Landesarchiv Berlin)

When Helga Verleger left Raasiku, she was sent to a number of other camps before being transferred to the Stutthof concentration camp. Because the Red Army was approaching, she was deported west in January 1945 from what was then Bromberg (now Bydgoszcz), where she had been made to do forced labor for the Reichsbahn, the German National Railway. She managed to escape on the journey. When the train arrived at its destination, most of the deportees from the transport to Raasiku were selected by members of the Security Police and then shot by Estonian policemen in the dunes near Kalevi-Liiva. Helga Verleger’s mother was one of them. Her father was murdered later on in Tartu.

How did the transport lists end up in the Arolsen Archives?

After World War II, the American Jewish Joint Distribution Committee, a U.S. aid organization, opened an office in Berlin to help survivors locate relatives and clarify the whereabouts of deportees. The organization evaluated the transport lists systematically and created a card file of names, which is now in the Yad Vashem archives. A copy is held in the Arolsen Archives. The carbon copies of the transport lists that were originally sent to the tax authorities were transferred to the International Tracing Service, now the Arolsen Archives, in 1953, where they are still used as a research aid today.

Dr. Akim Jah joined the Research and Education department of the Arolsen Archives as a Research Associate in 2015. His work involves researching the history of Nazi persecution and developing and implementing educational concepts for history. His publications include: